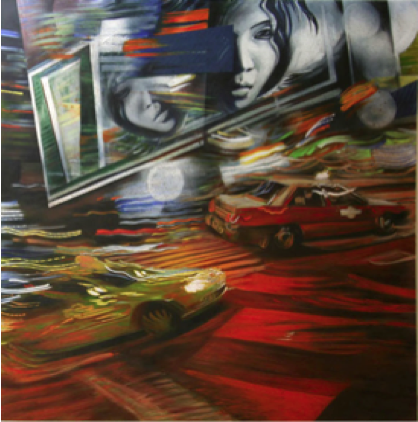 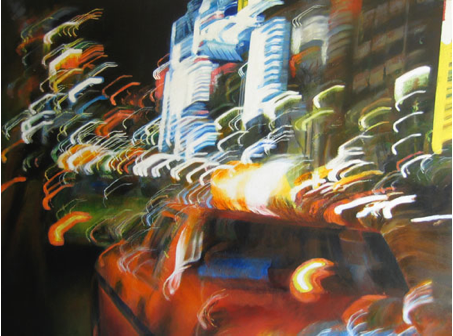 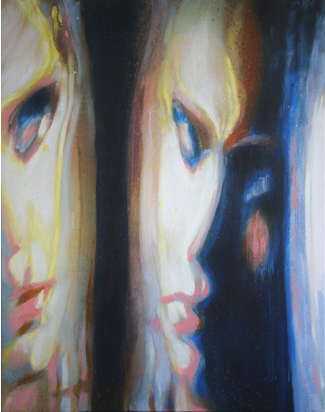 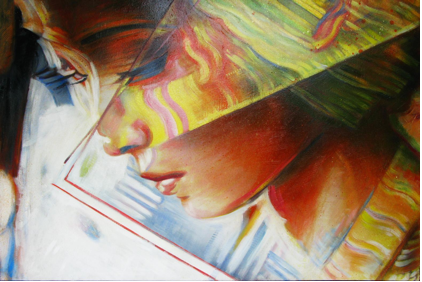 Speed has the ability to seduce and excite us; to bewitch us into choices and to erase the weight of the past. It has stolen the passion of men for centuries and thrusts us forward with the blur of the new. It has become a very layered concept in our contemporary world, one (re)defined by technology, the excess of mobility and that all-blanketing concept of Globalization, what the French Philosopher Paul Virilo describes as the ‘speed of light.’ He continues, “…the speed of light does not merely transform the world. It becomes the world…In this way, history now inscribes itself in real time, in the ‘live’, in the realm of interactivity…We are no longer concerned with real space.”

Matthew Carver’s paintings immerse the viewer in this ‘unreal’ spatial vortex Virilo describes, the metaphorical fracture of speed as paint hits canvas in luminous blips and trails. It is an illusory space rather than that of postcard propaganda or nostalgia and its reverberation consumes the gallery with the energy of a tornado.  Speed – and its counterpart technology – affect not just what we see, but how we see. This is the foundation to Carver’s painting and this new suite of works made for Malaysia, “Sirens and Lights”.

While Carver’s paintings over the years have been informed by his movement between a palette of ‘exotic’ locations – Tokyo, Hong Kong, Singapore, Seoul, Shanghai, Beijing, Kuala Lumpur and Las Vegas – these new paintings step beyond location par sé. Source material is morphed and sutured with a DJs sampling and the result has the pulse of now rather than where. They describe a post-Globalized-neo-Oriental nowhere that has a synergy with the homogeneity of immersive advertising. It is a constructed scape not so dissimilar to Ridley Scott’s 1982 film Blade Runner with its crusty edges of crumbling capitalism and underbelly of anarchy, one that has a curious currency as we face today’s global economic crisis, a shattering if you like, of the world we know. Whilst an abstraction, Carver’s ocular judo is in sync with the fraying of this collective contemporary landscape.

“Matthew Carver explores the illusion of space within painting in order to investigate how representations of urbanism can be mapped onto experience. Working with fragments of the city, such as Tokyo street intersections where advertising lights and traffic are at extreme levels of density, he creates both large-scale paintings and anamorphic constructions that stretch time through space. Utilizing the grammar of digital technology with all its blips, blurs and manipulations, Carver’s constructions of space literally mirror the impossibilities of perceiving contemporary city spaces in a single-shot view. In the metropolitan junctions that he represents dynamism and speed predominate, reminiscent of the Futurist’s progress-fuelled desire. By extending the illusory pictorial space of the flat plane of painting, this work collapses spatial and temporary qualities.”